REASON: The life of “Weird Al” Yankovic…if it was a complete and utter fabrication.

REVIEW: Weird: The Al Yankovic Story is for hardcore “Weird Al” Yankovic fans. Suppose you’re not devoted to his particular brand of silly. If so, you won’t understand why this film sold out its Midnight Madness premiere and usually had bored critics trying to squeeze into its only TIFF press screening. For those of us who don’t fit, Al is a big part of our lives. For his long-awaited biopic, Yankovic, who co-wrote and produced the film, has done the same with the genre on the big screen as he does with every song he satirizes. He kept the best parts and injected a whole lot of silliness. If it’s like anything that’s come before it, I’d compare it to the underrated Walk Hard: The Dewey Cox Story, albeit done on a fraction of the budget (it is a Roku Original, after all). While uneven, it’s often quite funny and has more than enough laughs packed into the film to make fans feel like Hollywood has finally done right by Weird Al.

Of course, as a Weird Al movie, don’t expect anything remotely grounded in reality to appear. The film spoofs all the biopic standards, from the strict, unloving father (the great Toby Huss) and doting mother (the ever-lovely Julianne Nicholson), to being connected with the wise mentor (Rainn Wilson’s Dr. Demento) through his struggles with the bottle and finally a blood-soaked rampage through Columbia to meet Pablo Escobar. See what I mean about makeup? I don’t know what’s harder to believe—that Weird Al ever drank or the fact that he had a shootout with Pablo Escobar over Madonna.

Oddly, the film is at its best when it’s lower, with the early teenage years having a memorable scene where young Weird Al gets busted for being at a Polka party. The bits where he comes up with “My Bologna” and “Another One Rides the Bus” (on a dare from Jack Black’s Wolfman Jack and David Dastmalchian’s John Deacon) are some of the funniest bits in the film. The legions of cameos prove just how beloved Yankovic is, with a who’s who of the comedy world popping up.

Daniel Radcliffe pours his heart into playing Yankovic, who has a shredded physique that nods to how incredibly buff actors often play famous non-buff singers. Al sings everything himself, but Radcliffe has an innocence about him that makes him a weird Al. Evan Rachel Wood is also really funny as the film’s version of Madonna, here portrayed as a femme fatale out to suck the life out of Al, with the payoff to her arc being one of the funniest things in the film. There’s a central joke around the writing of “Eat It” that takes the film in a different direction that I won’t spoil, but suffice it to say that the hilarity of the first act starts to falter a bit in the middle. There’s an overlong LSD hallucination that’s too reminiscent of similar scenes we’ve seen done over and over again, and the action-movie showdown at Columbia, while fun, goes on a bit too long and is too reminiscent of recent Unbearable weight of massive talent.

It has to be said, though, that the movie is a bit like Al’s music in that not every joke lands, but when they do, they’re so funny that they make up for the ones that don’t. Al is famously clean-cut, meaning the film has very little blue humor, but one of his strengths has always been that he doesn’t need to be obscene to get a laugh. Instead, he is smart. Al even has a cameo as one of the Scotti Brothers, based on his longtime label. Director Eric Appel, one of the main guys at Funny or Die (who made the film), made his feature film debut and co-wrote the film with Al. He also wrote and directed short film this is based on and clearly has a deep love for all things Weird Al.

Ultimately, Weird Al fans might not get the joke, but if you love the man and his music, this is a lot of fun. While I would have loved to see more spoof videos (how can you make a Weird Al movie and barely show any of the videos?) or for them to tackle UHFI still laughed more often than not and will probably check this out again when it hits streaming. 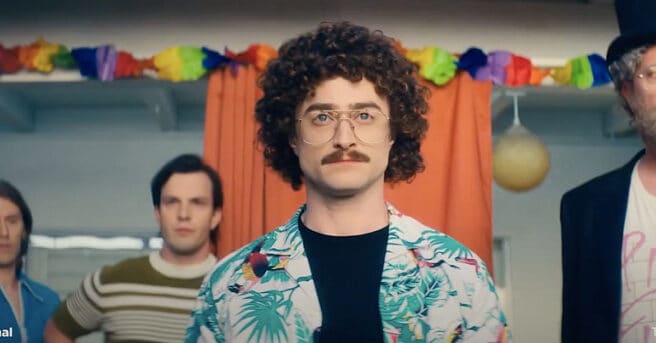