REVIEW: This year’s TIFF hasn’t been short on devastating dramas, but the more outrageous a film is, the more you can expect a certain amount of backlash. Maybe that explains why Florian Zeller The son saw a surprising amount of vitriol against it after its TIFF screenings, with words like “manipulative” and “horrifying” cropping up in many articles. Here’s another word that not enough people include in their reviews – genuine.

The son tackles the uncomfortable but very real subject of teenage depression and self-harm. The film, a kind of companion piece to Zellers The father, follows Peter (Hugh Jackman), a powerful businessman on the brink of a major coup, when he is asked to help a politician on the run in Washington. Everything seems to be going well as he has a beautiful wife (Vanessa Kirby) and a baby. But he also has another family he left a few years ago, and while he’s always tried to stay involved in his son’s life, he carries some guilt about not always being there. When his ex arrives at his apartment to tell him that their son has dropped out of school and cut himself, he invites the boy to move in, only to soon realize that his son is suffering from crippling depression.

Maybe one of the things that annoys people about The son it shows that depression is a hard thing to fight. You can be a great mom and dad, like Jackman and Dern are here, and throw tons of money at treating the problem, but it might not always work out.

Zen McGrath gives a haunting performance as Nicholas. A generally nice boy, he resents his father and new wife a bit, but they are not the cause of his depression and he does not particularly blame them. As he tells his father, life simply weighs on him and he can’t explain why he feels the way he does. If you’ve ever suffered from depression, his portrayal will hit home in many ways, especially in the lighter moments, such as when he has an impromptu dance session with his father and stepmother. One moment he’s having a great time, and the next he’s dead behind the eyes.

Zeller brings a great deal of empathy and compassion to the film, but he doesn’t spare you the misery Nicholas feels or how it tears his parents apart, mainly, as depicted here, his father.

Jackman has rarely been better, playing an essentially happy-go-lucky guy, a charmer who is simply not qualified to handle his son’s condition. He’s used to being able to persuade or charm people, but he can’t do anything with Nicholas, and he knows it. We’ve never seen him as vulnerable as he is here, with one standout scene being a chilling moment when he visits his estranged father, played by Anthony Hopkins in a cameo. At first, the two seem friendly, until Jackman begins to confide in his father, and the latter sees it as an attack on him, iceing out his son in a particularly cold-blooded and cruel way. We see in this moment what a lousy father is, and it’s a reminder from Zeller (who adapted his play with Christopher Hampton) to the audience that regardless of what may have happened in his marriage, Peter is far from a bad father .

Dern’s Kate actually gets the same treatment. We can see that she is devastated by the fact that Jackman left her, but she doesn’t weaponize it and can put those feelings aside to deal with their son. Ditto Vanessa Kirby as the compassionate stepmother. In a way, her part is the most challenging as she has to convey the frustration of having her own child to raise and not being able to let what’s going on with Nicholas affect her too deeply as she has his own child. real priorities. She has to protect herself and her child, but you also get the sense that she has a lot of empathy for Peter and compassion for Nicholas. That’s the beauty of it The sonno one in this film has pure bad intentions (besides Hopkins – though it’s implied he’s up to no good), but in the end, love isn’t always enough to save anyone.

Zeller has made an elegant film, with a terrific score by Hans Zimmer, in a rare stab at drama for the legendary composer. While a companion piece to The father, the film is not a sequel as other reports have suggested, though it could easily be. It is not as radical as The father, which took you inside the mind of a man struggling with dementia. The style is more conventional here, but it suits the material. Zeller makes a serious misstep at the end, with a fantasy sequence that leaves a bad taste in my mouth (along with many other critics, it seems – who can’t get past that), and its excision would better serve the film. Even still, I found The son to be a moving film, and while the conclusion is harrowing, it’s supposed to be, with a final line uttered over and over by Kirby’s character that I found haunting but true. 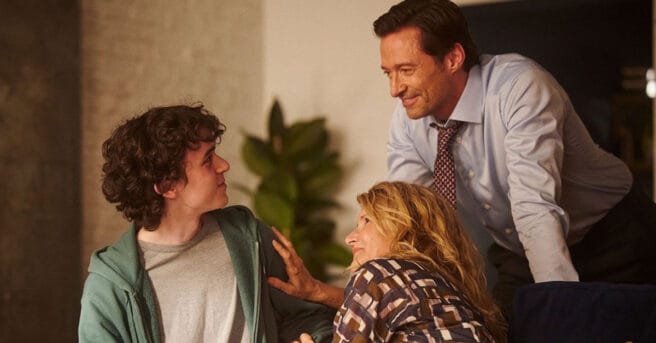