REASON: A young couple (Nicholas Hoult & Anya Taylor-Joy) visit an ultra-exclusive restaurant on a secluded island run by a chef (Ralph Fiennes) whose staff have a cult-like devotion to their genius boss.

REVIEW: The menu was just the kind of black-hearted, cynical satire I needed midway through the Toronto International Festival. When you watch movie after movie, it’s sometimes easy for your eyes to get a little bleary, but The menu is an energetic blast that will make even the most cynical audience shake. It’s a delightful romp that evokes satire on wealth and haute cuisine, with several Grand Guignol moments that even veer toward the horror genre.

It is brilliantly written by Seth Reiss and Will Tracy and crisply directed by Succession‘s Mark Mylod (like the show it’s produced by Adam McKay and Will Ferrell). Anya Taylor-Joy anchors the film as Margot, a young woman who signs up at the last minute for the $1,200-a-head dinner. The rules of Fiennes’ restaurant don’t allow seating for one, so Nicholas Hoult, an ultra-wealthy (and pompous) foodie, gets her to tag along when his date ditches him. She’s not impressed with the hoops guests have to jump through to get food, and the group takes a chartered boat to the island for exact seating. There is no in or out for the duration of the meal.

The group is a loathsome collection of the ultra-rich, including perhaps the world’s most pretentious food critic (Janet McTeer) and her lackey (Paul Adelstein), a genuine comedy star (John Leguizamo) and his assistant (Aimee Carrero). There’s also an older couple (Reed Birney & Judith Light) who can’t stop staring at Margot and some financier brothers (Arturo Castro, Rob Yang and Mark St. Cyr) who work for the billionaire who owns the restaurant.

The film belongs to Ralph Fiennes and Anya Taylor-Joy, but everyone gets their moment to shine, with Hong Chau particularly notable as Fiennes’ number two, who rules the seats with an iron fist. Taylor-Joy is the “us” character, being the only non-wealthy guest and the only one not enchanted by the incredibly pretentious kitchen, where each course is listed by its ingredients on screen as the film progresses. This brings her to the attention of Fiennes’ chef Slowik, who becomes concerned when he sees that she is not eating and was not the original guest to attend his seating.

Fiennes has always had one flair for comedy and is distinguished by the ultra-dry kind we see here. Eventually, things are revealed that push the film in a different, darker direction, but the less said the better. Like Succession, there is a great deal of loathing infused into the film for the 1%, with the film ultimately serving as a kind of warning about how those in the service industry are exploited to the point of breaking them. FX’s The bear raises some of the same issues (in a gut-wrenchingly real way), but The menu takes it in a more satirical, heightened direction, and it becomes clear as the film goes on that this is thoroughly intended to be the last meal Fiennes’ Slowik ever serves … or that his guests ever eat.

It’s funny how much The menu feels like perhaps the darkest episode of Succession ever, since it would be easy to imagine the Roys being the Slowiks’ guests for an evening, with $1,200 for a dinner not out of the question for them (“what are we eating, Rolexes?” Margot asks). Hopefully the trailers won’t give away too many of the surprises in store for Slowik’s guests, as part of the film’s power comes from how unpredictable it is throughout. It’s a film to watch without knowing too much about it beyond the basic premise, but for me it was one of the best highlights of what has already been a strong showing for TIFF post-pandemic. 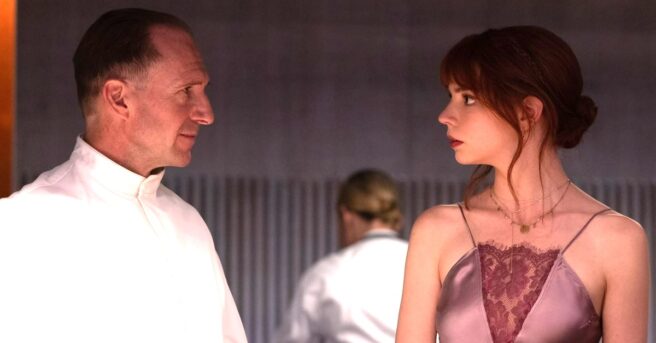 Five Nights at Freddy’s movie gets Emma Tammi to direct