Reason: When brilliant scientist Amber Chesborough disappears along the Colombian-Venezuelan border, her brother and her husband – both elite US Army commandos – race to find her in the middle of a guerrilla war and discover that the woman they love may have a secret .

Review: Mark Boal has made a career out of telling military stories. From those based on true stories (Zero Dark Thirty) to those inspired by reality (The Hurt Locker), Boal has also moved on to action-oriented blockbusters such as Triple Frontier. His latest project is Echo 3, an international espionage thriller full of gritty action and military tactics that tries to tell a socio-political drama full of heavy stunt work and complicated storytelling. Despite some truly pulse-pounding firefights that rival any of his big-screen efforts, Mark Boal’s characters can’t reach the same level of complexity as the action sequences. Echo 3 is decent, but far from as good as it should or could be.

Echo 3 opens with a scene showing Amber Chesborough (Jessica Ann Collins) in the Venezuelan jungle on her knees as armed soldiers hold her at gunpoint. Fast forward six months earlier, we find Amber on her wedding day as she marries Prince (Michiel Huisman). Amber’s brother, Bambi (Luke Evans), is there and they celebrate, but during the reception they are called away on a mission. Both Bambi and Prince are part of a highly trained military unit and are deployed on a mission to Afghanistan, where they suffer a heavy loss. The series then shifts three months later as Bambi and Prince are at odds over their roles in the botched operation. Amber, a scientist who studies psychotropic plants, prepares to leave for Venezuela, where she will be captured. The series then follows Amber’s journey in South America as well as Prince and Bambi’s off-the-book mission to rescue her.

As the series unfolds over ten episodes (five of which were made available for this review), Boal and his writing team craft a narrative that moves back and forth through the timeline while also shifting to give us the perspective of multiple characters. The bilingual nature of this series provides full sequences in English as well as Spanish as the global cast tells a rescue story mixed with a military angle focused on a secret guerilla war in Central and South America with deeper consequences for all involved. It seems like it would make for an engaging and sprawling narrative, but the lack of focus on the main characters makes this extremely challenging. With Amber serving as the link between Bambi and Prince, along with their shared military experience, I expected there to be some sort of bond the three shared. But, Echo 3 doesn’t spend nearly enough time developing the chemistry between Collins, Evans, and Huisman, so when multiple supporting characters enter the mix, it’s very hard to follow them all with any sort of interest.

Jessica Collins is good as the kidnapped scientist, and she gets one hell of a stunt showcase in the star-studded fifth episode of the series, but it represents another chapter where the narrative stalls after building momentum from the previous hour. So many characters enter the story at different times that it’s hard enough to keep track of them all, but the perspective follows many of them and leaves the main story threads we were invested in at the time. This leaves Luke Evans’ compelling performance as the protective older brother and Michiel Huisman’s wealthy and paranoid husband as two-dimensional clichés rather than well-rounded characters worth following. Combine that with intriguing characters played by Franka Potente, Martina Gusman, James Udom and many more, and we’re left with an oversized cast in an unbalanced story.

With direction from Claudia Losa, Pablo Trapero and Mark Boal in his directorial debut, Echo 3 is best when in action mode. The location shooting in Columbia gives the series a realism that is lacking in some big military projects, and it feels more realistic than recent series like The Terminal List, but it is also surprisingly critical of the countries it takes place in, both Spanish-speaking as well as the US . Echo 3 is critical of the types of secret wars waged without public knowledge and spends a lot of time weaving the massive chess match in which everyone from political figures down to the poorest villagers are involved, but it struggles to give us enough time to really care about any of it. Episodes ventured from raucous gunfights to extended sequences of silence interspersed with laborious dialogue that left me wondering how this series could be equal parts fascinating and boring. Inspired by the Israeli series When Heroes Fly, Echo 3 has some solid cinematography and a good score from Christopher Young, but struggles to be as engaging as it should be.

Echo 3 would probably have made a better feature film than a series with many of the subplots and characters not as important to the overall story as Mark Boal and his writing team thought. I would have enjoyed this series a lot more if it had spent more time focusing on the three leads and the psychological and emotional effects of this story on them as individuals and as a family. Not having seen the second half of the season, I can’t say for sure if or not Echo 3 manages to pull everything together, but based on how much happens in the first five episodes and how many characters and plot threads start in the fourth and fifth episodes, I’m not convinced it will stick the landing. Overall, this is a great series with some powerfully intense moments, but it lacks enough to make me feel invested in the characters to stick with it until the end.

Echo 3 premiered on November 23 on AppleTV+. 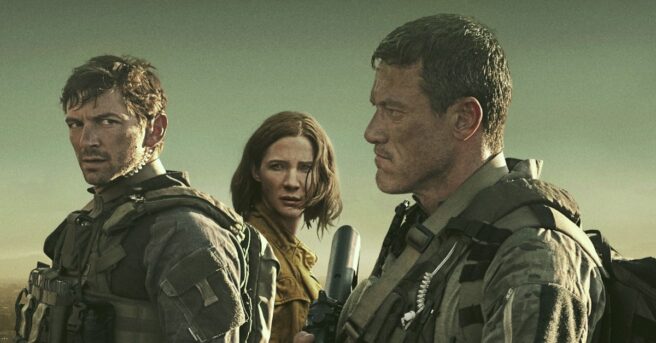