All Quiet on the Western Front Review (TIFF)

REASON: In this updated version of the classic WWI story, a German schoolboy named Paul (Felix Kammerer) and his schoolmates enlist in the army, but find themselves little more than cannon fodder as the war rages on and on without a shred of insight.

REVIEW: For the uninitiated, the 1930 version of Completely quiet on the west front was widely acclaimed in its time, winning Best Picture and Best Director Oscars, but also made history as the first film to win the top awards after being based on a book (written by Erich Maria Remarque). It was also wildly controversial, with the Nazis famously letting rats loose on theaters that dared play it in Germany. Its anti-war message meant that re-releases of the film were severely cut – although the current version is completely restored to what the director (Lewis Milestone) originally intended.

Being a film that is 92 years old and was one of the early talkies, it is a bit creaky today, mainly due to the pantomime acting as it was the early days of sound. This new version of the Completely quiet on the west front is anything but squeaky clean. Using Remarque’s book and the 1930 film as a starting point, director Edward Berger has made a visceral anti-war experience that, along with Sam Mendes’ latest 1917, fully immerses the viewer in the hell of trench warfare in ways previous films never did. It is also the first German-language film version of Remarque’s novel.

The novel this is based on is a slim volume. Berger’s film expands the story to be an epic exploration of Germany’s role in World War I, particularly the divide between the aristocratic Prussian generals and the working-class soldiers they send to their graves by the millions. We also follow the real-life German historical figure Matthias Erzberger (Daniel Brühl) as he tries to negotiate for peace, but is suffocated by the generals’ pride and France’s desire to not only claim victory but also humiliate their opponent, which in the end is helping to pave the way for the tragedy of the Second World War.

However, most of the film follows the German soldier’s journey from being a wide-eyed schoolboy eager for the adventure of war to a hardened soldier with a death wish. Felix Kammerer gives a fantastic performance, evoking Paul’s naivety and fear early on to his eventual disillusionment and fatalism in a way that no other actor has ever managed. Berger helps him by staging some bravura sequences, such as a scene at the beginning where we see a young soldier die only to be stripped naked so his uniform can be patched up and reused, eventually given to Paul.

The fight scenes are on par with anything seen in Sam Mendes’ 1917with a massive sequence involving tanks and flamethrowers that ranks among the harrowing scenes of up-close-and-personal trench warfare I’ve seen in the genre since Saving Private Ryan. In addition to Kammerer, the film also features an excellent performance by Albrecht Schuch as “Kat” Katczinsky, the much older soldier who takes Paul under his wing and teaches him how to survive. He is depicted as the only one who cares whether any of these boys live or die, taking on a brotherly (or even fatherly) role in the squad, even though he is ultimately just a recruit like them.

Berger is working with a big budget here, with Netflix pulling out all the stops to make this truly epic. While on the way to the streamer, it played well on the big screen at TIFF, where it was incredibly riveting. The haunting score by composer Hauschka was impressive, with jarring industrial synth notes that are particularly effective in emphasizing the horror of what we see on screen.

Completely quiet on the west front is coming to Netflix this fall, and it’s definitely something to keep an eye on. Typically WWII is the war most often given the epic treatment. Yet WWI was the first “total war” and has rarely been depicted so effectively – especially not from the German side. Remarque’s story has always been one of the great anti-war narratives, and time has certainly not dulled its power. 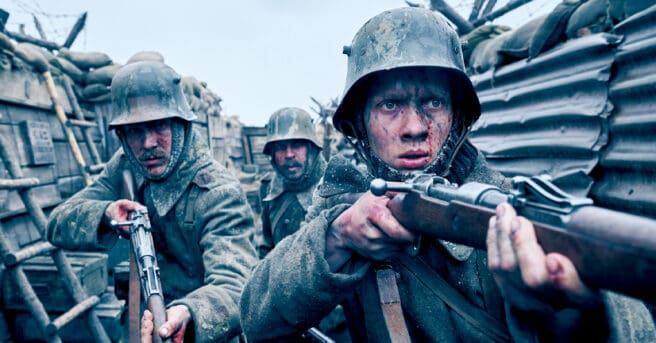