Be the best you can be.

Bill Russell died this weekend aged 88. We’re republishing our 2014 profile in honor of the 18-time champion.

There is an ongoing debate in sports where athletes from different generations are compared as if there is a level playing field between them. Would the 70s Lakers wipe the floor with the 90s iteration? Are Larry Bird’s Celtics superior to Michael Jordan’s Bulls? These arguments generally end as deadlocked as they begin. I have one more for you. Where do the hall of fame studded Celtics teams of the 50s and 60s stack up against today’s competition, specifically their all-star center, Bill Russell? Some would argue that their success should be adjusted for inflation.

Bill Russell won an NCAA championship, Olympic gold medal and NBA title, all in one year. He won eleven NBA titles in thirteen seasons, the last two as a player-coach without assistants. In all, he won championships eighteen times during the twenty-one years Russell played organized basketball.

In a recent ceremony at Boston’s City Hall Plaza, a bronze statue was erected in Russell’s honor, as much for his off-the-field accomplishments as his on-field accomplishments. Success as such lends itself easily to a plan for the ever-evolving man, especially those of us in our mid-to-late twenties. This is the time we create who and what we are to be. Whether it’s a new job, career advancement, or pushing our way through everyday struggles, we’re in that state of change, laying the bricks for who we’re going to be. Russell’s life and career provide a rough outline of the innovation, teamwork and integrity we need to be the best possible versions of ourselves when we get where we need to go. What follows is a glimpse into his life, career and achievements in a way that we can try to emulate if we are lucky enough. Although Russell doesn’t believe in luck.

When he was drafted into the NBA, Bill Russell entered a league that measured centers solely on their offensive input. Still, Russell wasn’t an offensive center by a long shot. Points and offensive percentages alone fail to place him among the greats of his generation, forget all the time. Yet he changed the game.

Russell made defense his calling card, blocking shots, not in the stands as we see so many players do today. Russell would block the ball to a teammate or grab it cleanly out of the air. There are no statistics on this. The NBA didn’t measure blocks. Russell invented them. Before him, centers were encouraged to stay flat-footed as a defensive practice. Russell went against this method and used instinct to create his own.

Blocked shots weren’t his only defensive contribution. Quick, mobile big men like Dwight Howard and Kevin Garnett were few and far between in Russell’s playing days. Playing against bigger and bulkier centers, Russell learned to use his quickness to help play defense and get back to his man quickly. This was another innovation that did not exist before Russell and is now a ubiquitous part of the game. Defensive rotations are common in today’s game.

Aside from his defensive innovation, Russell was a tenacious player who would not give up. This persistence is best illustrated by a radio call from Johnny Most:

In each game, Russell battled with determination to overcome his offensive deficiencies with tenacity and a heightened overall understanding of the game’s intricacies. And time and time again, Russell found a way to win. During his college, Olympic and professional career, he played in twenty-one wins or home runs. Bill Russell never lost one. 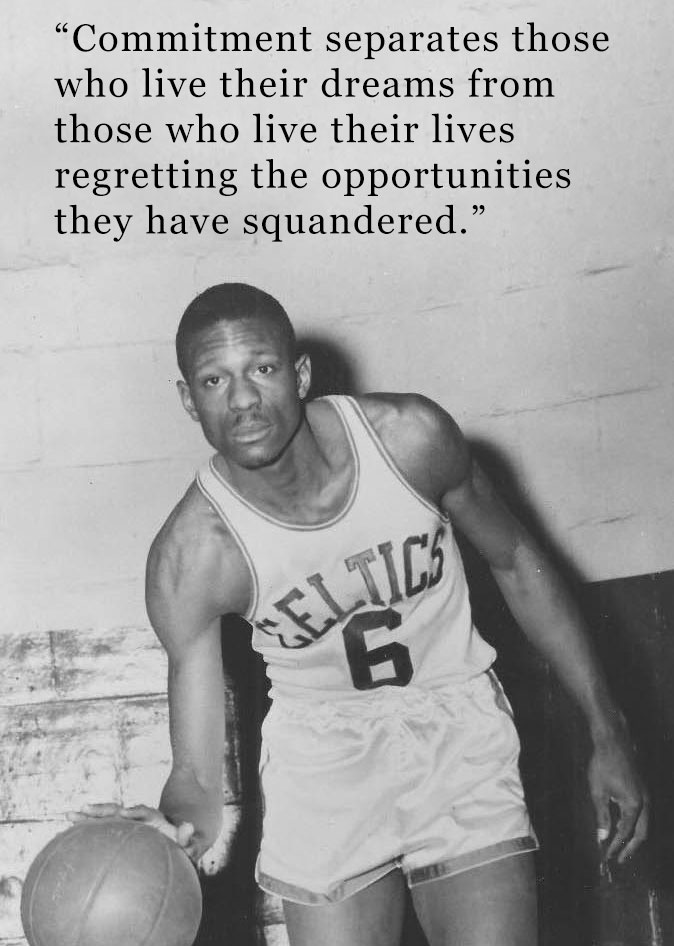 How does it all relate to us? Think about your current job, that project that’s been hitting you in the boardroom, or that DIY business you’ve been putting off in the garage. If Russell’s career shows us anything, it’s that negative statements don’t belong if success is the playoffs. Russell played against bigger, stronger opponents with more offensive skills than himself. Yet he prevailed time and time again. So cut the excuses, look at things from a different perspective, explore the possibilities and find another way. And remember that giving up is not an option. Be 21-0 in loser-goes-home games.

In a conversation with Kevin Garnett during the Celtics’ 2008 championship game, Russell told Garnett:

I think you’re going to win at least two or three championships here. And if you don’t, but I see you playing like you should be playing, I’ll share one of mine with you. If you play the way you play and you dedicate yourself to doing this, they will come. It’s like that field of dreams. If you build it, they will come. You might have to put your arms around a few guys and take them with you. But you can’t pull them, you have to put your arms around them and take them with you.

This quote speaks to Russell’s views in several ways, the most important being the idea of ​​teamwork. This 2008 championship was a classic case of stars sacrificing their individual excellence for the sake of the team. This is Russell’s mantra. More importantly, though, it was a classic case of the team winning over individuals, much in the same way that Russell consistently beat the more physically talented Wilt Chamberlain. On the way to the ’08 title, the Celtics beat the Cleveland Lebrons before Lebron came up with the team idea himself. I’ll admit he’s still learning it two championships in. Russell never had that problem. 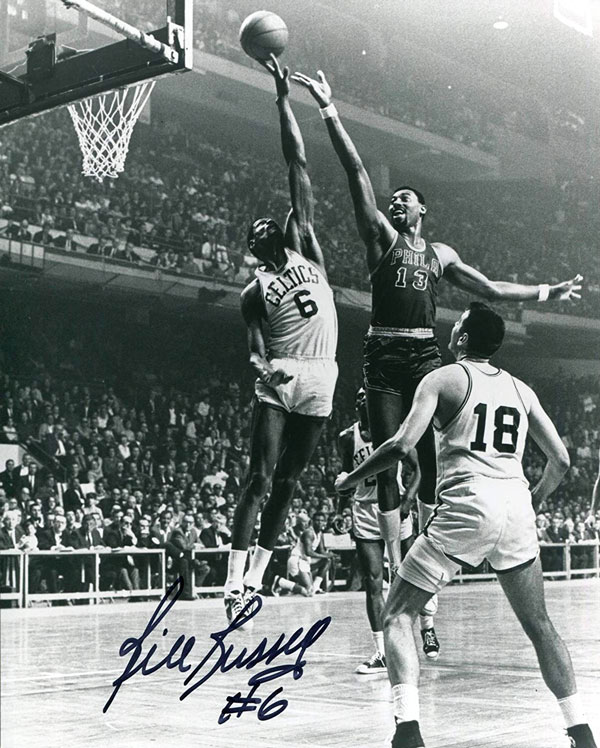 An autographed photo of Bill Russell for sale

In his junior year of college, Russell averaged 20 points and 20 rebounds per game and led his 28-1 USF basketball team to a national championship. At the end of the season, he wasn’t even named the best center in Northern California. Russell’s response suggests that this lack of recognition helped form his team mentality. He stated,

Well, it let me know that if I were to accept these as the last judges of my career, I would die a bitter old man. So I made a conscious decision: “What I’m going to do is I’m going to do my best to win every match. So when my career is over, it will be a historical fact that I won these matches, these championships , and no one has an opinion on how good I am or how good other guys are or compare things.

At the unveiling of the statue, Russell remarked, “The most important thing to me is the friends I’ve made. The greatest honor I’ve had playing for the Celtics is that they made me their captain. And then I’ve always thanked my teammates to let me help them become champions.” 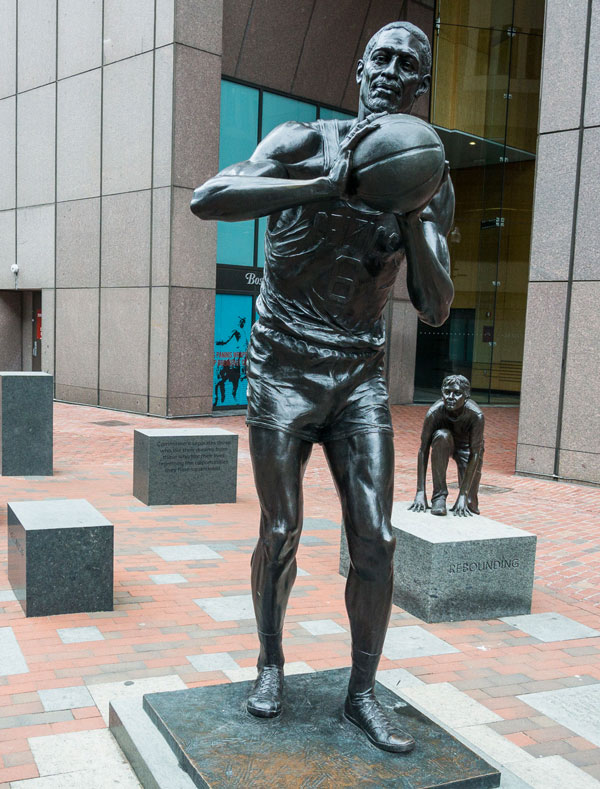 You may be asking yourself how teamwork can help you. Being part of a team gives you the ability to tackle larger projects by bringing together the strengths and skills of a variety of people. Russell played with several hall-of-famers. It could have been easy to get in a bind for shots, minutes and points. However, as in any organization, some people excel at certain tasks, while others display a different set. Instead of being a pedal to the metal universe, it would take it upon you, as Russell did, to learn to work with and adapt to the people who share your common goal. Throughout art and education, and in the cooperative environment that business has become, the ability to collaborate is an undisputed asset that leads to success. Proper teamwork strengthens interpersonal skills, elevates viewpoints, and allows for a more varied frame of reference. It also creates mutual accountability and the benefit of multiple individuals caring about the same goal. Russell embodied teamwork and became a leader as a result. And we all want to be known as management material.

Russell was a great advocate for civil rights. It wasn’t because he was actively trying to be a civil rights leader. By all accounts, Russell was a private person who didn’t want much to do with causing trouble. But there was trouble all around him, whether he liked it or not. Throughout his life and career, he was consistently in the middle of heated race relations. Throughout his high school, college and professional career, Russell was the victim of racial abuse and bigotry.

Russell benefited from coaches who did not see race as a factor on or off the field. His high school coach, George Powles, encouraged the then 5’10” Russell to play basketball, going so far as to pay the two dollars for a year’s membership for Russell to the Boy’s Club. Russell’s college coach, Phil Woolpert, integrated the University of San Francisco basketball team and was the first college coach to start three black players.Russell’s professional coach, Red Auerbach, was the first to start five black players.

The actions of these men were not made with civil rights in mind. They were basketball decisions. Russell respected that about each of them. When asked by Auerbach about being player-coach of the Celtics, Russell accepted, later saying that if he had been asked to take the job as a civil rights act, making him the first black coach, he would have promptly declined. Russell accepted the offer because he believed he was the best man for the job.

Integrity can sometimes become a mythical word. You don’t have to go out and look for a reason. If you have one, more power to you, but it’s not the reason that makes the man. Russell wasn’t looking for a soapbox. But by being the best possible version of himself, he often found himself standing on one. 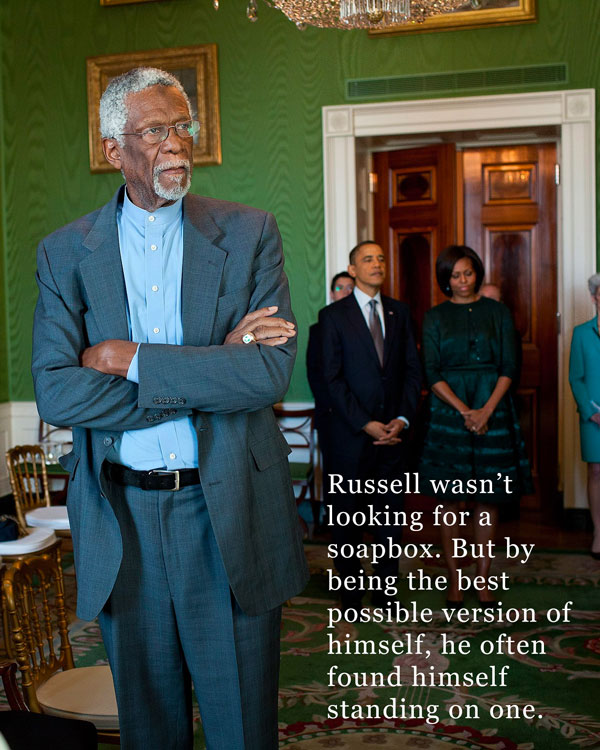 So how can integrity specifically help you? Let’s take the office as our example. Stand behind the choices you make every day. By considering all aspects of each decision, you can make an informed choice and stand by it. Think of the people in your life or organization who do this. It may be a select few, but those few are generally respected. It is integrity in its simplest form.

Integrity is a whole bunch of little things that go together. Be where you are and commit, wholeheartedly, to whatever you are doing. The byproduct of committing to people and relationships, ventures and activities, if you do so sincerely, is the ability to stand by those commitments with pride. Russell said it best: “Philosophically, all I’ve ever done is try never to embarrass my father.”

Since his playing days, Russell has devoted himself to mentoring as part of the Massachusetts Mentoring Partnership. Even when a statue in his honor was proposed, Russell opposed it until the project included support for his mentoring program.

One of Russell’s favorite quotes is: “There are no one else’s children in America. There are only next-generation Americans.” This view is one of the many ways Russell embodies the never-say-die mentality. His fight didn’t stop when he walked off the basketball court.

“All winning streaks begin with a single victory. All successful people, teams, companies experience their success by an ability to grow to move from level one to the next, never take shortcuts, never think beyond what is required to make things work right where they are.” Because when it comes down to it, “No matter where you are in life, you cannot win consistently unless you are in a position to win.” Bill Russell was a winner. Even better, Bill Russell is a winner. His influence on all facets of his life is as great as his bronze counterpart.

This is how you get started with your new fishing hobby