On Sunday, Taylor Swift arrived on the red carpet at the MTV Europe Music Awards at the PSD Bank Dome in Düsseldorf, Germany, wearing an incredibly sexy look by David Koma and Delfina. The outfit was composed of a form-fitting black bodysuit with a plunging neckline and spaghetti straps, over which she wore a jeweled skirt covered in emerald and white stones arranged in diamond configurations.

It hung from her natural waist to just above her ankles. On her feet, Swift wore open-toe black kitten heels. To accessorise, she wore a pair of small rings, a black manicure, tiny diamond earrings and had her hair swept up in a bun. For makeup, she wore cat eyeliner with a shimmering silver shadow over it and a coral lip. 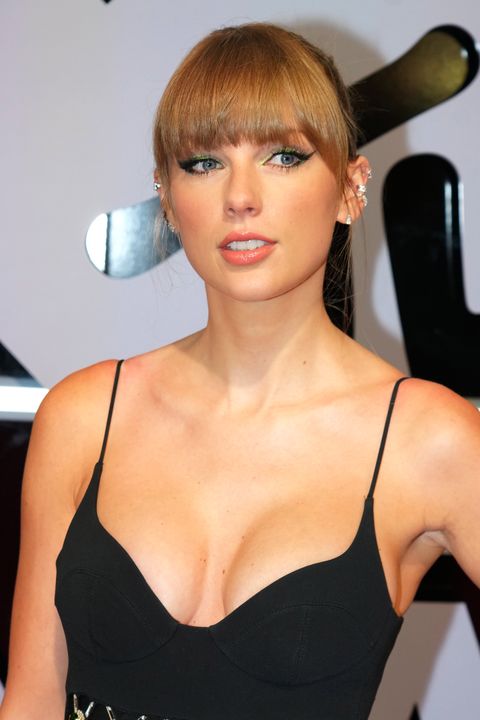 The pop star was nominated for six songs, including Best Longform Video, which is a brand new MTV EMA category for 2022. Swift has been extremely busy following the release of her latest album, Midnights. She’s been gearing up for her Eras Tour, which just keeps getting bigger and bigger. This week, she added 17 more dates to the US leg and will travel across the country, including Los Angeles, Las Vegas, Denver, Tampa and Houston.

It’s been years since Swift toured, and in that time she’s not only released Midnightsbut her albums folklore and forever, as well as re-recording much of her old music to take control of the masters. Fans are incredibly excited to see Swift back on stage, and she’s also lined up a bunch of incredible opening acts, with performances by Paramore, Gayle, Beabadoobee, Muna, Gracie Abrams, Phoebe Bridgers, Girl in Red, Owenn and Haim.

Swift is especially friends with the Haim sisters and even featured them in her new music video for her song “Bejewled,” which is full of all the Easter eggs people have come to expect from a Taylor Swift production.

Your guide to crushing the Christmas party hair game

The French-girl fashion myth has hit the TikTok generation