When Mahsa Amini, a 22-year-old Kurdish woman, got off the train last September on her vacation in Tehran, she was wearing a loose, black chiffon headscarf with five strands of hair. The hair was a statement – the five strands boldly symbolized defiance of the regime, on the way to a complete removal of the headscarf. She chose a deep red gloss to cover her lips, a decision that seemed to foreshadow the bloodshed that followed. Within minutes, she was taken aside by the Guidance Patrol, the moral police of the Islamic Republic of Iran, and beaten within inches of her life. Accused of immoral dress and appearance, she died in custody shortly afterwards.

For months, the world has watched as Amini’s death spurred an outpouring of resistance on the streets of Iran, where protesters communicate their politics through fashion and, in many cases, are punished for it. Hundreds have died in the ongoing protests linked to headscarf laws and dress codes. But as the protests intensified last month, news emerged that government officials are considering change the law.

Amini’s story is not unique. It’s not new either. For decades, fashion, style and makeup choices have been dictated by the country’s strict laws. The Islamist regime – which came to power during the 1979 Iranian revolution – exercises its authority by regulating public dress and appearance and imposing austerity through dress. Women should wear loose, preferably black fabrics that cover them from head to toe. No hair or ears should show; the scarf must be so tightly wound that it reveals only the oval part of the face. No make-up or conspicuous accessories are allowed.

Protesters defy these laws in myriad ways; most recently by cutting their hair in solidarity with other Iranians. (Conspicuous hairstyles for men or hair peeking out from scarves for women can be grounds for arrest and public flogging.) Every sartorial choice can become a battleground for politics. Any display of clothing may be a punishable offence.

Navigate the changing politics of beauty 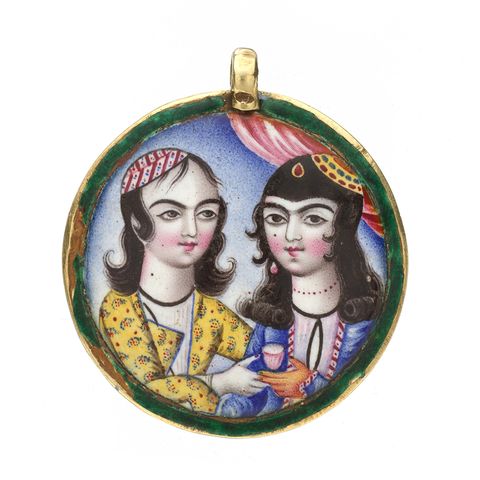 There is a long history of fashion intertwined with power and rule in Iran dating back to Qajar dynasty, who ruled Iran from 1789 to 1925. In the 19th century, paintings depicting male and female beauty were remarkably similar, with oval faces and moon-shaped, kohl-lined eyes, heavy eyebrows that met in the middle, and hair , which framed the face. Men appeared beardless, sometimes with mustaches – women too. Beauty was explored through the face, body and the choice of outerwear, which in the 19th century included baggy harem pants and tunics for both men and women. Both sexes embraced the same styles and played with gender on both sides – the politics of which were understood and explored through ideals of beauty. Followers of the dynasty chose a similar aesthetic and expressed their politics with their style choices.

Each successive ruling party in Iran changed fashion to suit their political viewpoint. And as each ruler came to power and formulated their style, so too did a subculture that spoke back to those in power through oppositional goods.

For example, when the Pahlavi family re-emerged as monarchs in the 1960s and 1970s, they signaled their alignment with the West by favoring Western trends. Royals and their supporters wore haute couture, fresh from the runways of Paris and Milan, as they walked the streets of urban centers across the country. Yves Saint Laurent was pleasantly surprised to see his miniskirt designs featured in Iran before they were embraced in the United States. Imported Western chic was the currency of the royalists. Hair and makeup for both men and women followed.

But a burgeoning class of dissidents saw these elections as evidence of a corrupt regime eroding a country’s moral order by becomingWestern poison,” or excessively fascinated by the West. Long legs emerging from tweed miniskirts or short kaftans were seen as unacceptable. So were the eye-catching painted designs of blue and green eyeshadows that accentuated their faces.

To express their opposition, the Islamists encouraged women to don the chador, a black cloak covering their bodies. Men were asked to cover their faces with beards. And Oxford shirts with ties were criticized as “too Western.” Instead, rounded collars and heavy linen robes in muted colors were seen as symbols of Islamist resistance.

When the Islamists were victorious in ousting the Shah, they ran on a platform to reclaim Iran for Iranians, and their platform would be executed by regulating modesty and dress. In the early 1980s, when Ayatollah Khomeini led an Islamist regime to power, the hijab became became the mandatory dress code for women. 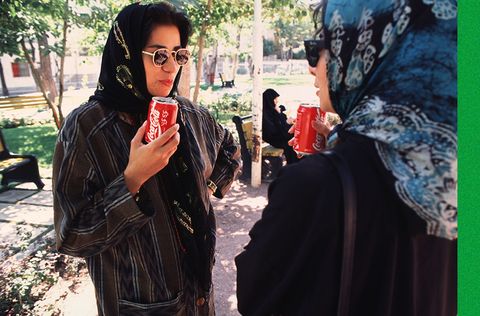 Now the Iranian people are once again using their style to express their opinion. Hitting back at a regime they had been at odds with for the past four decades, fashion has been their means of communication with each other and with the brutal Islamists in power.

It began in the late 1980s with the scarf slipping back one millimeter at a time, earning the movement the nickname “Millimeter revolution.” The more strands of hair pulled out, the more revolutionary the individual. If the hair was dyed, even bolder. And high fashion was reserved for indoors—house parties, raves, or underground concerts. Women went inside and promptly threw off their black shrouds, revealing sparkly nightgowns or even haute couture.

Slowly, in the late 1990s, brightly colored scarves and form-fitting coats replaced the black chador. The bodies were still technically covered, but Islamic outerwear became fashionable. Women played with colors – white or red were revolutionary. They played with the shape – the more structured or tight-fitting the aforementioned cloak, the more glowing the resistance. Red lipstick and heavily made-up eyes became de rigueur.

In the summer of 2004 thousands of women organized en masse to appear in the streets of Tehran in open-toed shoes with red shellaced polish on the hands and toes. They reasoned that the punishment – allegedly hands dipped in cockroaches and feet covered in insects – could not possibly be carried out on thousands of women at once. If they all showed up on the same day, there weren’t enough cockroaches in all of Iran to arrest more than a hundred women at once. They were right. The first several dozen met this fate. But the regime was outnumbered and appeared to be outnumbered. After July 2004, open-toed shoes were considered legal. 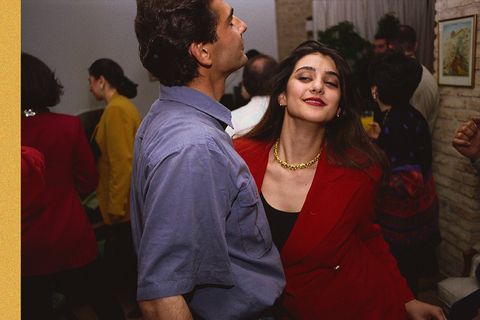 Looking towards the future

Fashion in Iran is not just about looking good. Because simply removing a headscarf could give a woman a deadly beating, as Amini showed us, it is actually a revolutionary act. The more conspicuous the appearance, the more female and male allies in the resistance communicate their disrespect to the regime. The byproduct is a gradual chipping away at the regime’s power through style – and right now it seems to be working. Take for example abolition of the morality police and potential changes to the mandatory hijab law. It might be a small step, but it’s something. One cannot avoid thinking that a giant leap is necessary and long overdue. 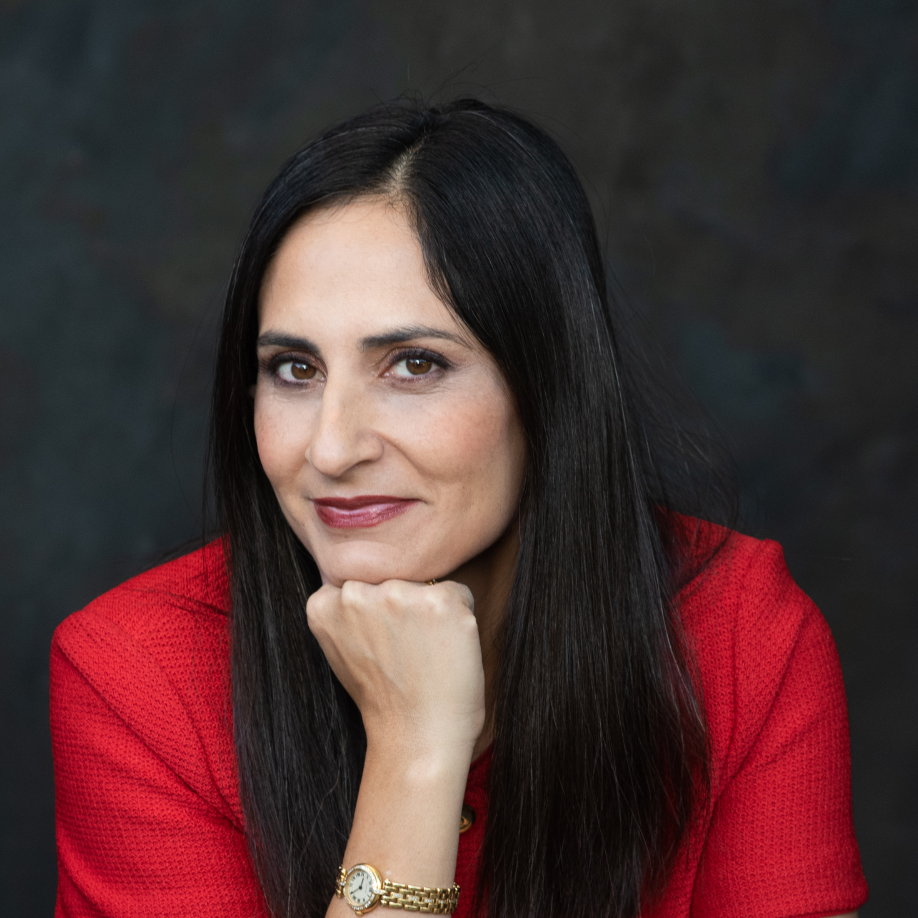 Pardis Mahdavi, PhD is Provost and Executive Vice President at the University of Montana. Her research interests include gendered work, human trafficking, migration, sexuality, human rights, transnational feminism and public health in the context of changing global and political structures. She is a lifetime member of the Council on Foreign Relations and has been a fellow at the Social Science Research Council, the American Council of Learned Societies, Google Ideas, and the Woodrow Wilson International Center for Scholars.